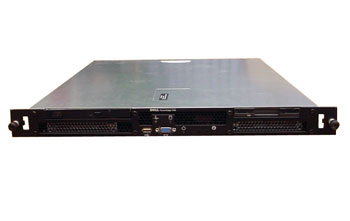 The Boss has a habit of hoarding obsolete hardware.

One of my first tasks at the firm was to go through a stack of about 20 Dell PowerEdge 750 servers that he had bought from eBay and resurrect a few of them.

Our IT department needs to run several services for the firm — for instance: a web server for the company website, a trouble ticket system, and a development server for us to test things out on. Rather than buy new equipment, I was sent to the “graveyard” to see what I could come up with.

The following is what I learned about working with a Dell PowerEdge 750 server.

Working with equipment this old (the PowerEdge 750 came out in 2003) has an additional challenge over newer technology, and that is there is hardly any documentation available for it. When I first started working on these servers, the Dell website itself didn’t even have the manuals available. I burned a lot of time searching the web for a mirror somewhere.

Currently, the manuals are up again on the Dell website, but there’s no guarantee how long they will be available.

You’ll also find that the manuals that are available are pretty sparse. If your experience is like mine, you’ll run into a handful of problems that have no documentation in the aforementioned guides. I’ll share what I’ve learned here. If you come across anything else that would be nice to have in the manuals, email me or leave a comment. I can’t guarantee to have the answer for everything, but maybe we can help each other out. 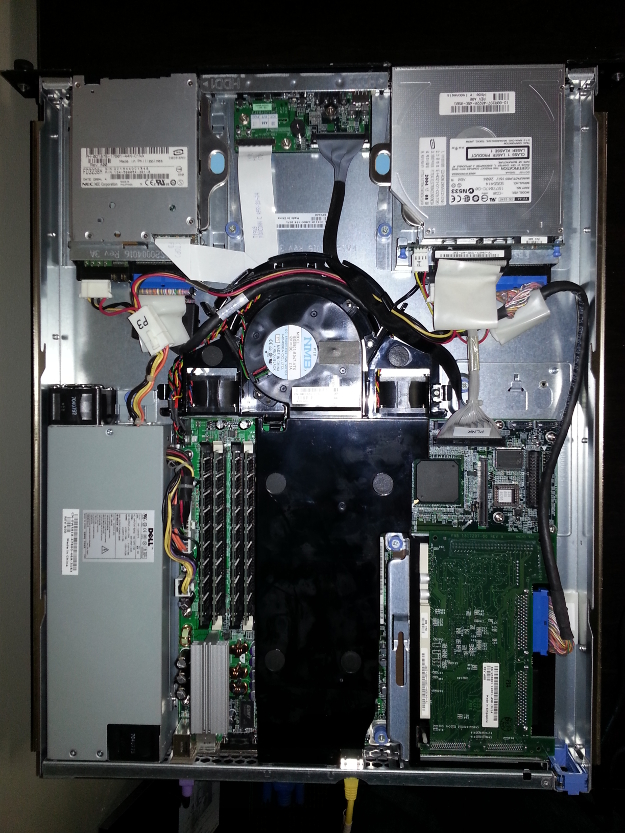 This is what the inside of a Dell PowerEdge 750 Server looks like.

A Dell PowerEdge 750 server is supposed to look something like the image above. In the top left corner is a floppy drive with a hard drive enclosed underneath. On the top right is a CD-ROM drive also on top of a hard drive.

In the bottom left corner is the power supply. To the right of that is the system RAM.

Keep moving right to find the fan, the processor, and several connection points for various components.

In my interaction with these servers, I’ve so far only had to work with the hard drives, floppy and CD-ROM drive, and the RAM.

Invalid Configuration: The CMOS batteries in these servers were all dead by the time I got them. This causes the BIOS to revert to its default settings whenever the computer is shutdown.

Ubuntu Boot Error: The Dell PowerEdge 750 is designed for Windows Server or Red Hat Linux. The firm doesn’t have the capital (or doesn’t give it to us anyway) to purchase enterprise software. There are a few different open source operating systems available for this situation, but the other guy and I prefer Ubuntu. I had to do this workaround to get it up and running, though.

Updating the BIOS: None of these servers had a BIOS version later than A02, and most were using A01. To try to get the most out of these old-timers I upgraded them to A06.

Rack-mounting: These servers were literally in a pile in a back hallway. After I got some functional again, they weren’t going to do anyone any good in the hallway. I had to get the boss to order some rails so we could mount them in the server room. This also required getting a network switch for the new rack.

“Adaptor at Baseport xxxx Not Responding“: One of the 750s I worked on was showing this error at boot. The linked article is a walkthrough on how to fix the error.

Booting from USB: I wrote an article explaining how to boot from USB on a Dell PowerEdge 750.

This is just a partial list of things I’ve encountered so far with these servers. I’m sure there will be several more lessons in the near future. I’ll update the list as I come across new bits of knowledge.