I’ve been working on some old Dell PowerEdge 750s that the boss bought at auction and had just left stacked in a back hallway. The goal was to get a few of them working so that we can run a web server and a few other internal apps. So far I’ve resurrected three and thought I was doing pretty good until I got this Ubuntu boot error: 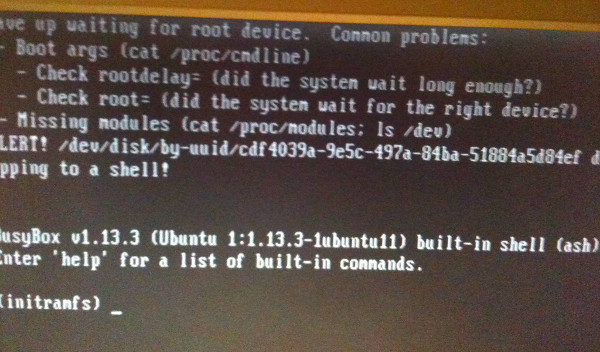 I’ve been working with Ubuntu on and off for a couple years, but I had never seen anything like this. I did some googling and found that when you get this error you can just type exit and hit enter to return to the normal boot process.

But even with that workaround it’s unsettling to have this error pop up on every boot-up.

On each of the machines I was using, I was installing Ubuntu 12.04 (Precise Pangolin) server edition. Of the three that I was working on, the first one didn’t have this error. What’s curious is that was the only machine that had only one hard drive — all the others had two hard drives.

While that information is interesting, it wasn’t very useful in coming up with a solution because I wasn’t going to take half of my hard drives out just to get the computers to boot.

After some more googling, I found that other people were having the same problem. I was disheartened that the best anyone could do was just say that it’s a bug in Ubuntu, so I kept trying to find a solution on my own.

That didn’t work. However it did get me one step closer to a solution.

Oddly enough, after I went through all the upgrade scripts, I rebooted and did not have a boot error anymore.

I have no idea what was different from upgrading to 12.04 instead of installing it directly. All I know is that I now have three working servers instead of just one.