These are just a few situations where virtualization saves the day, and where virtual box shows itself to be the best virtual machine available.

Sometimes you need to run programs that aren’t available for your operating system. Here’s one example:

The firm’s security cameras connect to the network so that the boss and the boffins can see what’s going on from any computer in the office. This is a useful feature. But you can’t view the camera feed without the security camera company’s software. Both a Mac and PC version are available, but the Mac version lacks a lot of features that the Windows version has. Unless you can run Windows programs, you can’t use those features.

With virtualization, it’s easy to have a Windows virtual machine running on a Mac. So when we want to use the security cameras, we can open up our virtual Windows install and quickly take a look at what’s going on.

Virtual machines are also useful for checking to make sure that what’s working on my computer will work on everyone else’s computer too.

I was recently tasked with setting up a shared folder on a Mac mini. It didn’t take but a few minutes to create the folder and put the Mac mini on the network. But it wasn’t until a few hours later that I realized that the folder was visible to other Macs but not to any Windows computers on the network.

This process was so much simpler with virtualization.

Virtualization for Testing Programs and Configurations

When I say we are building the IT department from scratch, I seriously mean from scratch. There are tons of applications and services that we need to implement before we’ll have any semblance of a corporate network.

But we can’t go changing things willy-nilly. We don’t want to break anything. And we need to know that a new service is going to work before we put it on the network. Virtualization gives us the capability of setting up a safe environment to test out new programs and configurations without any serious risk.

Why Virtual Box is the Best Virtual Machine

If you need a virtual machine, for the reasons listed above or otherwise, Virtual Box is an excellent solution for both enterprise and home use.

Virtual box is licensed under the GNU General Public License (GPL) version 2. This means it’s free, both monetarily and creatively. You don’t have to pay to download and use Virtual Box, and you aren’t limited to using it only at home or only at work. You can use it however you want, without cost.

The virtual machines that you install on the host (the “guests”) are equally flexible. In my current configuration, I have a Windows 7 guest and two Ubuntu Server guests. In addition to those systems, other popular guests are DOS, Solaris, OpenSolaris, and OpenBSD — just to name a few.

And you don’t have to feel limited to installing one guest or another. You can install several virtual guests on one computer. When you create each guest, you can assign how much RAM to allow that virtual machine to use and how much storage space it can have in a virtual hard drive. The hard drive space will be used as long as the virtual machine is installed, but the RAM is only used when the virtual machine is running. Since Virtual Box allows you to pause a virtual machine in its current state and resume it from the same spot whenever you want to, it’s easy to operate multiple machines and stay within the limitations of your hardware. 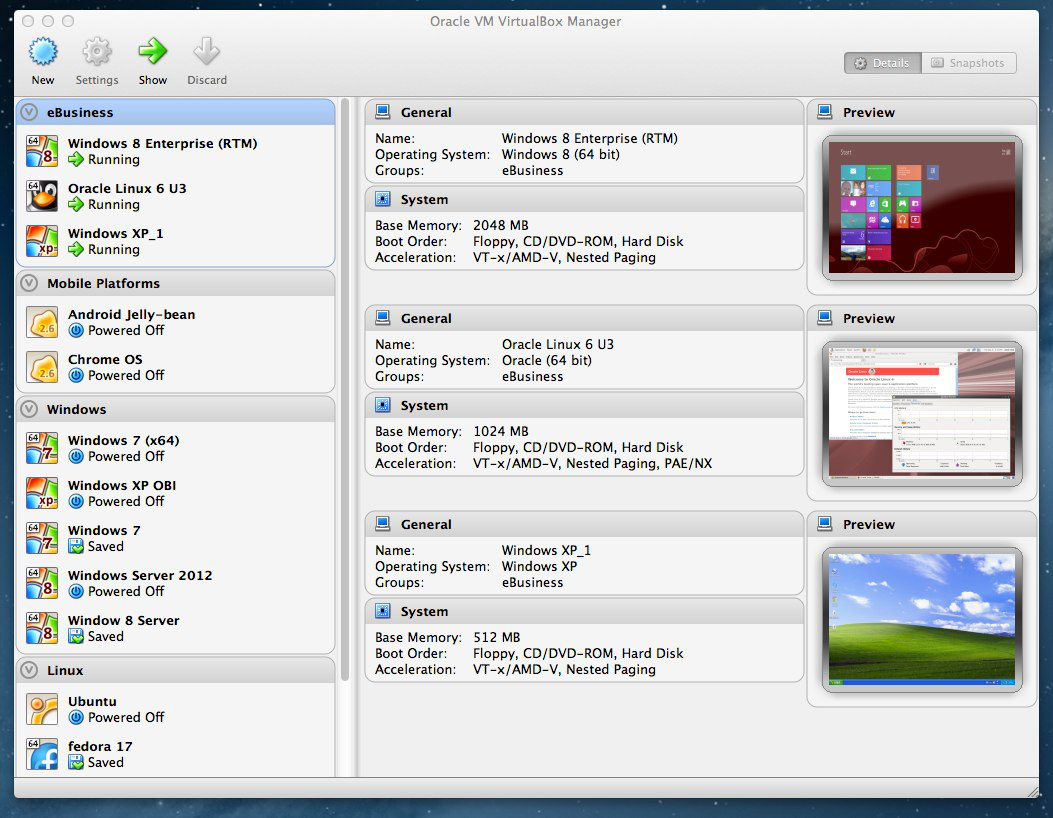 This Virtual Box has tons of guests installed.

With some virtualization products, the virtual machine operates completely independently from the host. That is fine in certain situations, but sometimes it’s important to be able to share the clipboard, folders, and hardware with the guest machine (and vice versa). With Virtual Box Guest Additions, either option is available.

Virtual Box Guest Additions are not automatically turned on, but they are easy to activate whenever you want to. Once the guest additions are installed, the virtual machines are so seamless they feel as if they could be part of the host computer. Sometimes I still like to ssh into my virtual Ubuntu machines, but with guest additions I don’t have to.

If you would like to enter the world of virtualization quickly, easily, and freely the best virtual machine for you is Virtual Box. To get started, head over to VirtualBox.org today.