Information technology is the empowering force behind any modern business. The IT departments of these businesses consist of the technicians that keep this force up and running. But the IT department isn’t always immediately aware of problems as soon as they arise. The rest of the business needs to be able to give performance feedback. And the best method of this feedback is through help desk software.

The Criticality of Help Desk Software

No system is perfect. Despite all our efforts to put out the best, things will always go wrong. Even if it’s the user who’s at fault (as is often the case), these users still need a way to communicate their problems with the IT department so we can fix them.

Before I started working at the firm, the other guy was just fielding trouble tickets through email or in person. The boffins would come up to him and tell him something wasn’t working, or they would send him an email.

Even with only one person in the IT department, this is not a good policy — even for a small business. 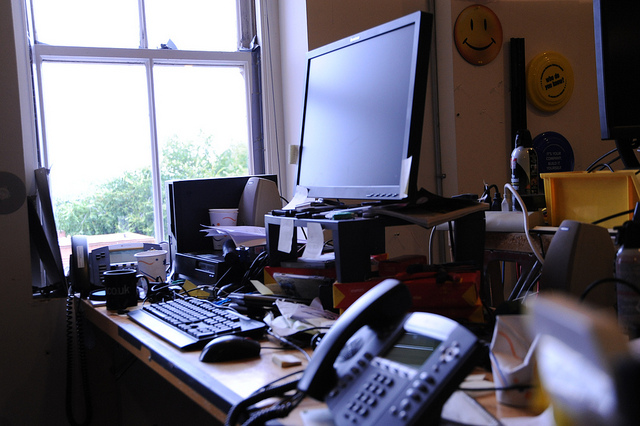 We needed a better trouble ticket system than post-its on a monitor.

Not having a ticketing system in place to manage trouble tickets leads to all sorts of problems. It’s completely inefficient, it’s prone to letting issues go unresolved, and it makes it nearly impossible to measure results and improve.

When the IT department gets reports of trouble only through email or verbally, there is no way to triage or prioritize this report compared to any other situations that might be going on. So while there may be a major server issue, an employee in the IT department might be working on someone’s printer because that’s what someone walked up and asked them to work on.

Planning also goes out the window with this sort of setup. A trouble ticket system allows IT help desk managers to see at once all of the items that need to be completed. From that perspective it’s much simpler to make a plan of attack to accomplish the goals of the department, rather than just handling situations as they come up.

Relying on memory or scattered notes instead of a tracking system greatly increases the likelihood that things will be forgotten. You might give yourself the benefit of the doubt and think that you will always write down every trouble report in an organized way, but when you’re in the thick of it there’s a good chance that you won’t have the ability to make a note. Then when things settle down, you don’t have anything to remind you that there was a problem. If your memory is sharp, perhaps you’ll remember, but trying to keep all of that in your mind all the time is a good way to drive yourself crazy with stress. It’s much easier (and more reliable) to let an support ticket system keep track of the trouble tickets.

If there were no such thing as helpdesk software, companies would be hamstrung by the chaotic mess created by a disorganized IT department. Nothing would get done. The world would end.

I didn’t want that to happen, so I set out to find a trouble ticket system for the firm. Here’s how it went down.

I knew we needed a helpdesk system to manage our trouble tickets, but because of the work our firm does it couldn’t be just any software. As with any application we put in place, there were very specific criteria that had to be met.

The firm does contract work for the government (mostly the military) and other corporations. A lot of the things the boffins work on are highly confidential. Because of this sensitive data, any software, service, or system we setup has to be hosted in house. Despite all the good things you may have heard about Zendesk or other similar services, those options for an IT service desk weren’t even on the table.

Another issue was cost. For whatever reason, our IT department has no budget. Whenever we need anything — whether that be a new server, some software, or even something as minuscule as a SATA cable — we have to ask the COO and hope he will actually order it for us. So obviously there’s no money to purchase something like a trouble ticket system. The philosophy behind open source software is noble, but the deciding factor in choosing an open source ticketing system over a proprietary one is that open source software means free helpdesk software.

With our business needs in mind, there weren’t many viable options left to consider (which is actually a good thing). This is not a conclusive list of software that met our requirements, but the ones I considered were:

Each of these ticketing software solutions are open source ticketing systems that can be self-hosted.

I tested out each of these three products and finally decided on OTRS. Here’s a brief summary of why.

Redmine is a project management software. It’s powered by Ruby on Rails. Installation was a bit difficult, and figuring out how to make it work the way I wanted it to involved too steep of a learning curve. The system seems to be designed more towards tracking bugs in projects than it did helping manage trouble reports from various departments. I think it’s a good product, but not for my purposes.

Request Tracker was my second help desk software trial. It’s developed and supported by a company called Best Practical, and its website claims that RT is “a battle-tested issue tracking system which thousands of organizations use for bug tracking, help desk ticketing, customer service, workflow processes, change management, network operations, youth counselling and even more.” Like my experience with Redmine, Request Tracker was very difficult to install. There are several extensions that promised features that sounded great, but attempting to implement those features required more patience than I was prepared to invest.

OTRS emerged as the winning ticket system for our IT helpdesk. The Open source Ticket Request System is a collection of Perl scripts that operate in conjunction with MySQL and the Apache webserver. I’m not sure if it’s the only one, but OTRS was the only trouble ticket system I found that was both open source and ITIL-compliant.

I’m not that familiar with Perl, so the installation of OTRS and all its dependencies was not simple. But there were several factors that encouraged me to persevere with this help desk product:

The fact that it is based on ITIL standards is just icing on the cake. When I shared it with the other guy, he was more excited about the asset management piece than the trouble ticket management.

With a bit of effort I was able to get OTRS up and running, and now we don’t have to rely on the memory of the other guy to keep track of trouble reports. The boffins can either log in to OTRS web interface and enter a trouble ticket (because it’s also an online ticketing system), or they can just send an email. This is no more difficult than what they were doing before. All they have to do is send it to the help desk email address instead of to the other guy, and OTRS creates a trouble ticket. We have all our issues in one place, and it’s easy to prioritize them to get things done efficiently.

OTRS might not be the solution for everyone, but it’s a great solution for us. What help desk software do/will you use?